to remember, to think, to do

i have trouble with thinking about myself and even more to remember what i have done, where i have been to, who i have spoken to. my memory is one of my biggest issues, because on the one hand i wish to recover certain moments, on the other i feel that in forgetting i undergo the creative process. between remembering, thinking and doing, my becoming problematizes itself.

i’m sitting on a danish chair. my father was a representative of several danish brands in the 50s and some of those objects are part of my daily life. about the old bang and olufsen radio, in the meantime offered to the radio museum, i only remember my mother turning it on and myself turning the volume up quite loudly. i believe i listened to about everything, and my mother found it a safe way to pull me away from my customary prankishness. about her i also remember her fondness of writing and reading, having put in my hands, when i was about thirteen, tolstoy and dostoyevsky, but also torga, roger martin du gard, saint-exupery.

while drawing i relive animated scenes of multiple characters, from indians and cowboys to assorted soldiers and their warfare apparatus, from tanks and airplanes to bayonets, materialised in chalk drawings, on the school’s blackboard, with grandiose success in a mention in a competition held by the diário de lisboa newspaper. that was the way my childhood went by, smoothly with no determined artistic callings, between basketball games, the “vampiro” book collection and comic books. some curiosity, with no particular deepness but expressed with sometimes silenced questions in school. from an uncle i inherited a “contact sheet” device and some chemical trays. i could only get my hands on the camera itself, a notorious pratika reflex bought by my father in germany in the post-war years, during my fifth year of high school. i made some photos in those years, but the calling did not surface and i was far from thinking that later i would work professionally in photography for twelve years. my dearest friend of all times, andré gomes, would have a decisive role in that first profession by lending me the cameras of his deceased father, alongside with collaboration challenges in the series of shows at his house, where he directed entire casts of lisbon’s future cross-dressing stars.

hence i distracted myself from the engineering university course i was doing at instituto superior técnico in the footsteps of my brother and in my parents’ eyes a safe future assured. in the beginning of the 70s my reference painter was noronha da costa. on trying to imitate him i suffered a viral hepatitis, because the paint sprinkling on my canvas was made with a blower and without a protective mask. listening to rádio clube português throughout the night, i filled my nostrils with enamels as the colour fields overlapped. naturally i missed many 8 am classes, including the ones from the famous mathematician campos ferreira, but even so i was able to do the first years of my engineering course without great trouble. in the meantime the university was a desolated place. several police vans were permanently parked in front of the central pavilion. we were controlled upon entry, watched as criminals with a camera on top of the chemistry pavilion. it began to be unbearable. after the 25th of april coup, one of the best sights that i keep from the 26th was the flight of the referred camera, tripod included, wisely thrown from the top of the pavilion, crashing into pieces on the ground.

during those years i developed my liking for photography. i convinced my mother to pay my enrollment in some art courses at sociedade nacional de belas artes (snba), and started the “part-time” that would change my life. the artistic training classes consumed my time more and more and university less and less. a friend remembers running into me in the hall of the central pavilion at técnico and repeatedly hearing me say “i can’t take this anymore!”. at snba a new world awaited me. first, rocha de sousa, proposing his structured exercises always based with long theoretical texts; and then sá nogueira, carrying on s.teil and nikolaides’ drawing courses and the rigorous study of the bauhaus courses and itten’s art of colour. rui mário gonçalves in his art history classes always had time between monet and matisse for the small stories going from references to jorge vieira’s “monument to the unknown political prisoner” (in those days only a scale model to be build) to bonard’s wife baths. at the same time, josé cândido proposed that i would assist him in the catalog photographic sessions for the traditional snba art salons, promoting my knowledge of several generations of artists and their work. i participated in the long snba direction meetings as the student representative and later as the coordinator manager of the artistic training course. from time to time josé ernesto de sousa would appear, shouting and arguing, trying to contaminate the others with his extraordinary dynamic.

i spent time with him in the final years of his life as we were both doing silkscreen at cooperativa diferença.ernesto, a culture militant, passed his joy and energy on to everyone, carrying around the weight of the multiple sclerosis as if it was nothing at all. i did some cultural work after the 25th of april and continuing on from snba, i thought that i should go to escola superior de belas artes (esbal). i don’t know what i was looking for, but it was there that i met croft, ana léon and cabrita. i got married and started working, to survive, as a photographer for the

navy as a 2nd class photographer, a job attained by a brilliant exam on the admission contest. every evening after work and classes at esbal, i would do some enormous oil bar and graphite drawings until it was 2 or 3 in the morning. but everything has its time and i realized that i no longer had time for school, despite the fantastic classes lectured by lagoa henriques. i couldn’t do any more book reviews, little art history works, model drawing or school programmed paintings, so in the 4th year i quit.

the drawings i enjoyed doing were the ones done in partnership with ana léon. i don’t remember anymore what they were but they were done with both hands, one mine and the other hers. we’d listen to the clash and would fill up entire sheets of paper. the “azulvermelho” (“bluered”) idea came up at that time. although i had already participated in exhibitions, this project, an entire space that would involve the spectator into blue and red, was a first statement of a work, the work i wanted to do. from then onwards work flowed continuously, obsessively. i dove into art history to get castles, walls, temples and ruins. drawings and painting kept their gigantic scale. i experimented all i could, changing a lot, moving from paper to wood, from acrylic to graphite. the art and communication centre (ar.co) emerged as a possibility for a teaching experience and it came with the added satisfaction to be a teacher in a school in which i could not enroll years before for economic reasons. i was a teacher at ar.co for twelve years and i restructured the drawing and painting departments. i left when i couldn’t relate anymore to the school and my daily time to paint was falling short.

some other moments come to mind:
– winning the união latina award – that i had decided not to apply for and only the persuasion of dear friend sommer ribeiro, who was always enthusiastic about my work, made me change my mind – that provided three important exhibitions;

– a stay in ireland following manuel costa cabral’s (at the time ar.co’s director) suggestion, where the discovery of woods and fairies altered my way of drawing and thinking;

– coming up with the “campo de sombras” exhibition plan for fundação pilar e juan miró de maiorca at a dinner, with the fish course and the museum director in front of me, on the occasion of winning a drawing award held by the same fundação;

– discovering the colour and pigment work of painter sousa pinto that lead to the exhibition “memória involuntária” in museu do chiado, a project that again disturbed the backgrounds of my painting;

– the installation “muro contra muro” initially done for galeria luís serpa that only had a presentation according to its original plan eleven years later at centro de arte de burgos;

– the exhibition of twelve years of work at centro de arte moderna – fundação calouste gulbenkian, in which the choice of works to be exhibited was the result of the special relation that i have with helena freitas and joão miguel fernandes jorge, allowing a view of myself that i had not experienced before;

– the exhibition at cgac (centro galego de arte contemporáneo) in santiago de compostela that allowed a statement of a new series of paintings.

knowing that a lot more has happened that was not stated here, i continue in my painting and other projects 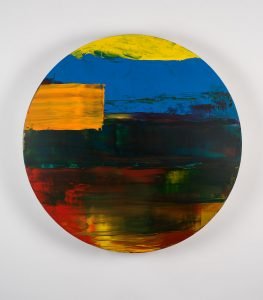